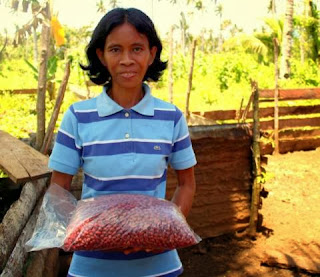 A year after the category 5 typhoon – the highest category for a storm – the children’s aid agency says tens of thousands are still struggling to find work to feed their families. The Typhoon, which struck on 4th December 2012, affected over six million people and left nearly 2000 dead or missing.

The storm caused widespread damage to agriculture, which account for the livelihoods of 80 per cent of the residents in the affected area. The Filipino government’s disaster agency estimates a loss of over US$700 million in agricultural damage, including bananas, coconuts, rice and maize.

“The job that aid agencies need to fulfil shouldn’t stop at immediate relief,” said Tom Howells, Team Leader for Save the Children’s Bopha Recovery Program. “But many are forced to end their projects as there is little to no funding available for long-term rehabilitation of livelihoods. Our worry is that these families will no longer be able to send their children to school, provide nutritious foods and a protective home environment once aid stops.”

Save the Children conducted two livelihoods projects in the Bopha-affected areas, unconditional cash grants for vulnerable families and cash-for-work to rehabilitate schools. Roselyn Cabatlao, 34, was one of the program’s beneficiaries in Davao Oriental after her family lost their only source of income – a coconut plantation – in the storm. It will take them at least seven more years to get back on their feet as coconut trees take about eight years to mature.

“I can see there are still many families here that do not have stable income because many of our coconuts have been damaged by the typhoon,” she said.

Through income generated from Save the Children’s cash-for-work program, Roselyn is now able to buy food, vitamins and condiments for her children. The mother of three was also given the tools and seeds to plant vegetables in their backyard for consumption and income. The vegetables and direct nutrition interventions helped Roselyn’s son, Jericho, to recover from severe acute malnutrition.

“Families like Roselyn will be left to their own devices once aid agencies leave. We have given them the basic tools to sustain themselves, but it will be years before Roselyn harvests coconuts again and builds a sturdy house for her family,” said Tom Howells.

Save the Children responded to the needs of affected families in Typhoon Bopha, delivering an
integrated package of child protection, education, health and nutrition, water sanitation and
hygiene, disaster preparedness in schools, food security and livelihoods in Agusan del Sur,
Compostela Valley and Davao Oriental. Overall, the children’s aid agency has reached about
138,000 people.